The 10 Top Languages for Localization 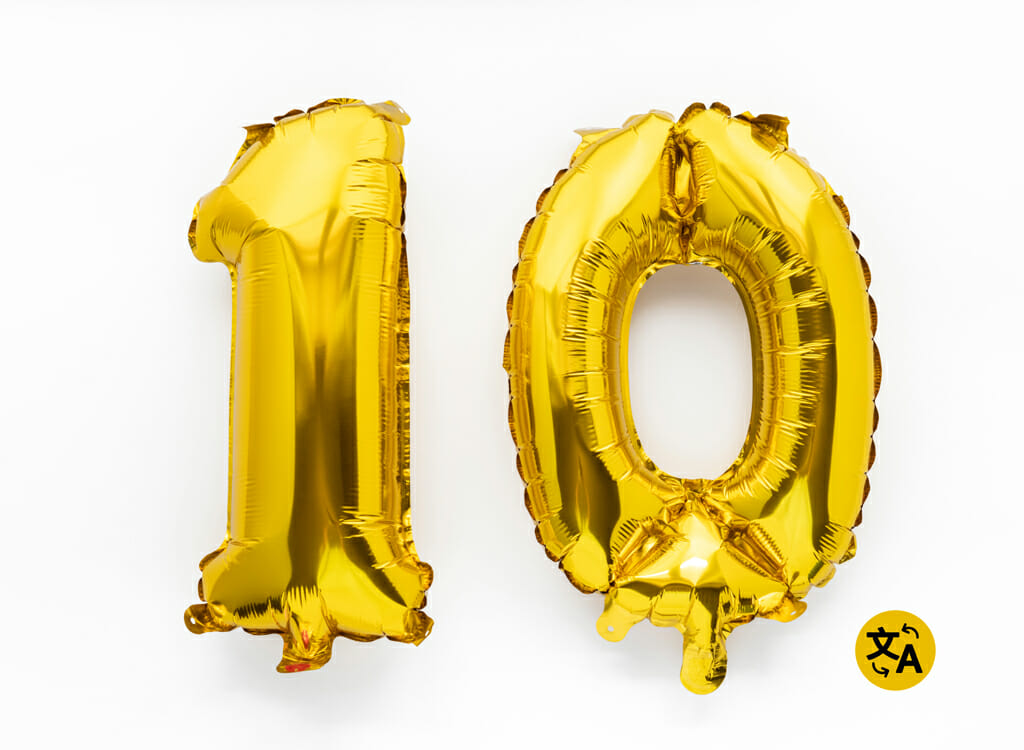 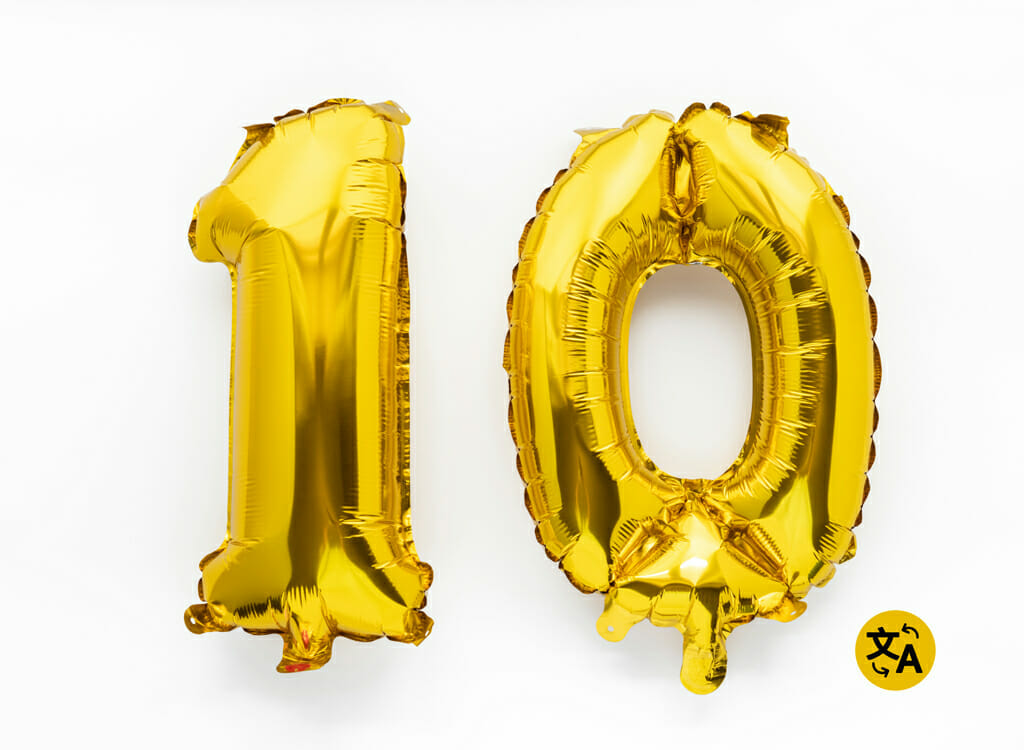 With roughly 7.8 billion inhabitants on Earth, the internet has drastically increased our ability to reach new audiences, even when we are not sharing a language.

The world is a big place, but thanks to the efforts of translation, localization, and transcreation in some ways it’s getting much smaller.

Recent reports suggest there are currently a staggering 7000+ languages spoken around the world. Even with a service as robust and malleable as ours, it would be impossible to translate your content into all of them! 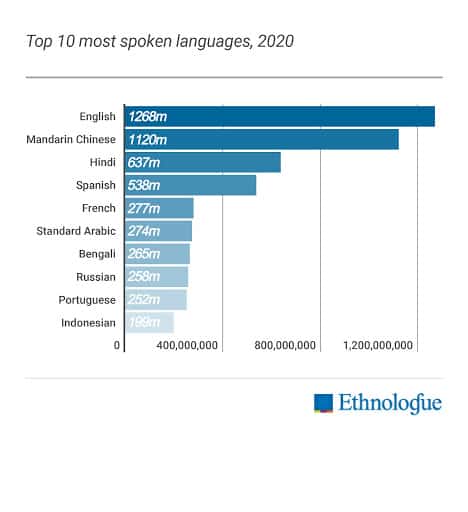 As you can see in contrast to the above infographic, the best languages for localization don’t always coincide with the most widely spoken. Below, we’ll explore each language individually and find out the benefits and reasons behind its inclusion on the list.

English has long been the de facto language of the world wide web since its inception. The weighting of native speakers to other speakers is particularly skewed for English as the infographic below showcases. Spoken in 94 countries, it’s also the most likely foreign language to be taught in schools and is the official language of many of the most prominent international organizations. 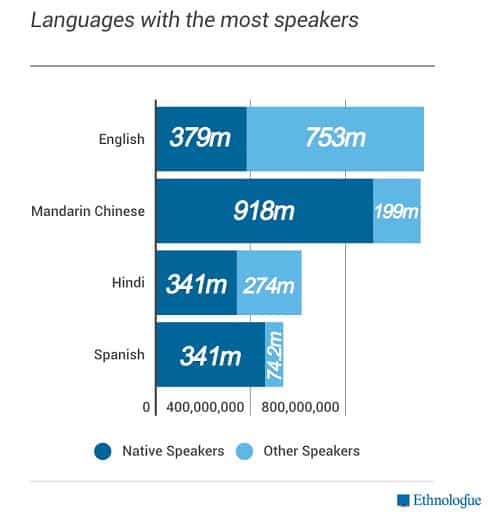 China is an interesting prospect. Given its economic explosion in recent years, it is currently still the strongest economy (based on GDP) as of 2020. ‘Chinese’ refers to a group of languages known as Sino-Tibetan and based solely on native speakers is miles ahead of other world languages due to its astronomical population. Given the strength of the economy and the outsourcing capabilities (low cost + high productivity), Chinese is almost as much a necessity as English, especially given the latter isn’t widely spoken in China itself. As the second most popular language amongst internet users and the world’s leading e-commerce market in 2019, it seems only a matter of time before Chinese becomes the most used internet language. 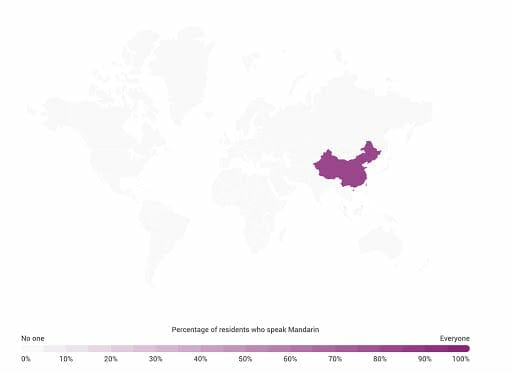 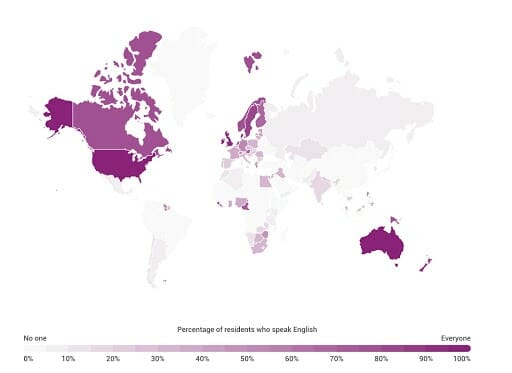 You may be surprised to see Spanish so high up this list but you’d be foolish to underestimate just how prevalent and widespread Spanish is and how many different international markets it can get you into. Opening the door not only to Spain but also to the myriad of countries comprising Latin America such as Mexico, Peru, Paraguay, and Ecuador. Not to be overlooked also is the US with an estimated 37.6m people speaking Spanish as their primary language there. With the Hispanic population of the US set to double by 2050, there is a reason Spanish makes the top 3. 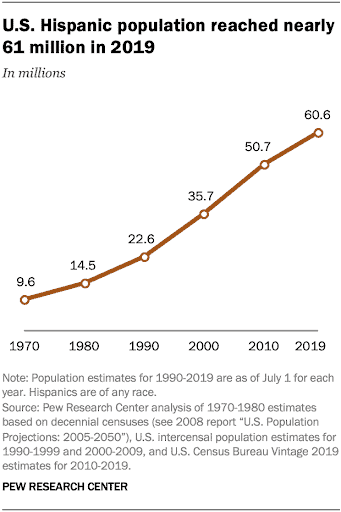 Spoken by 274m people worldwide and the official language of 28 countries, Arabic is quickly becoming a language necessary for internationalization. With internet growth rising in the Middle East and playing catch up to the West, it’s key to remember that many Arabic speakers only speak Arabic and so the translation of content is going to be key. Given the fundamental cultural differences, localization is especially important in the Middle East. Arabic-speaking nations are becoming intrinsic for trade elsewhere, both import and export, and with major events like the 2022 World Cup set to be held in Qatar, Arabic is a language not to be ignored. 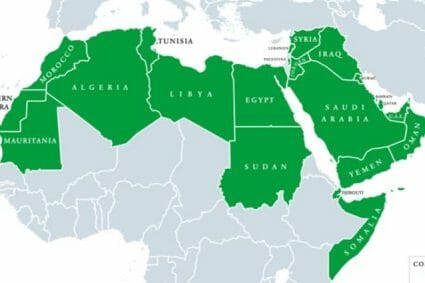 You might be surprised to find German so high on the list, but given that on top of the figures above an additional 75-100 million people speak it as a foreign language it is much more widespread than you might initially think. The 7th most used language for websites, although the weight of numbers isn’t on its side compared to some of the other languages on this list, German is also the official language of some of the most economically important countries in Europe: Germany, Austria, Belgium, Switzerland, Luxembourg, and Lichtenstein. Not to mention Germany has the largest economy in the European Union. Germany is also important for other reasons, being the 3rd largest contributor to research and development in the world, making German a particularly important language for science. 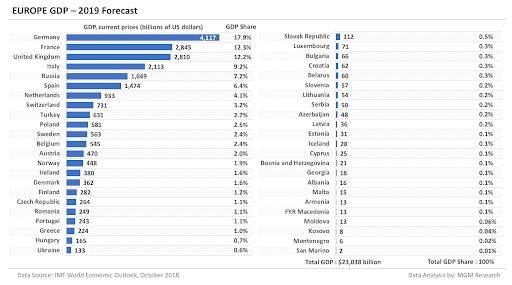 As with Spanish, Portuguese is not just about Portugal. Chiefly it is about Brazil and although the Portuguese spoken here does differ slightly, Brazil is the largest economy in Latin America, despite recent recessions and political unrest. According to UNESCO estimates, after English, Portuguese is the fastest-growing European language. Like Germany, Brazil is a scientific powerhouse and it is generally accepted that outside of the G8, Brazil is number one. Combine this with the fact that it sits at 9th in the top most spoken languages in 2020 and Portuguese is certainly a language not to gloss over in your translations. 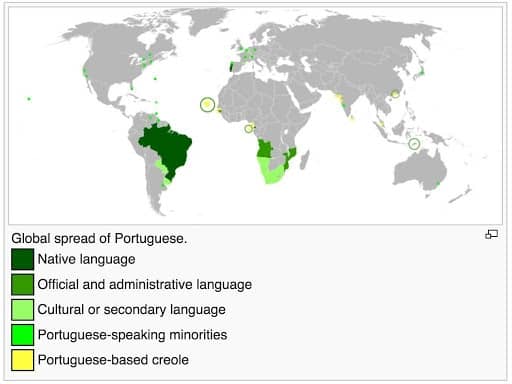 Currently the 8th most spoken language in the world and the 2nd most used for website content after English, Russian is not to be trifled with. As a member of the BRIC block (Brazil, Russia, India, and China), Russia is still considered one of the 4 world superpowers. IMF projections for 2020 before Coronavirus changed the playing field placed Russia 5th, set to outperform Germany. With vast natural resources, booming IT, Scientific, and Engineering sectors, and a low proficiency of English, Russian is certainly a language that you might find yourself translating to/from in the near future. 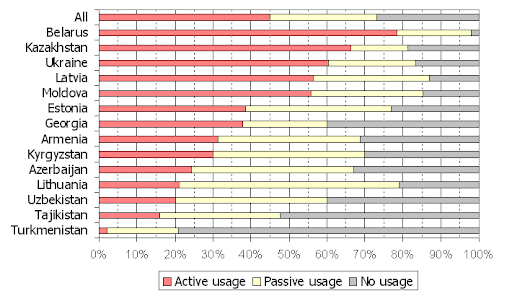 French is the official language of a whopping 29 countries and like Germany has even more speakers when one takes into account foreign language speakers. Two-thirds of native French speakers are found outside of France in Africa due to colonization with many nations still using French as their official language. When the UK finally leaves the EU, we can expect to see a swift uptake in French dominating EU proceedings. Combined with the emerging economies in Africa of Rwanda, Cote D’Ivoire and the Democratic Republic of Congo (all African Francophone nations) French should remain at the forefront of your localization.

Almost all of Japan’s native speakers are – unlike a lot of the other languages in this list – located in Japan. Furthermore, the country boasts the third-largest economy in the world. Like German, Japan has a reputation for excellence in technology and engineering and is the world’s second-largest investor in research and development. Not to mention perhaps the most technologically advanced nation on Earth. Japan is lightyears ahead of most when it comes to robotics and as we see big shifts in demand for AI and robotic workforces, localization and translation for Japanese are essential for futureproofing.

Hindi takes the final spot on the list and given the languages that missed out, you might be wondering why? Well, India is a monolith in several different senses; the 7th largest country by area, 2nd in terms of population, and perhaps currently one of the fastest-growing economies. Already with so many native speakers, Hindi has grown massively, especially in internet adoption, particularly because of mobile web penetration in a country where internet access is heavily dependent on smartphones. India’s huge and culturally diverse consumer base alone is more than enough reason to seriously consider localization for international businesses. 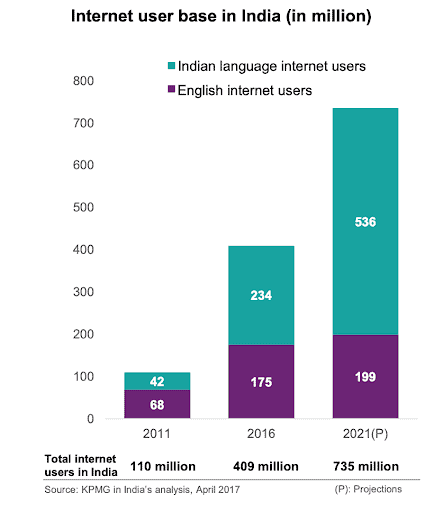 So there you have it! The Top 10 languages for localization of your website and content. Localization is the key to effective translation and having a service like TextUnited at your disposal with so many potential translation projects is a no-brainer. Every language you add to your localizations is a new market and revenue stream just waiting to be tapped.

languageslocalization
Sign up to our newsletter for all the latest translation and localization news, straight to your inbox.